Once upon a time, there was a pond in a far-a

way land.  It was a pretty little pond, with colourful flowers sprouting along the sides and lily pads floating on the quietly rippling surface.  The water gently plopped and splashed as the frogs jumped playfully on and off the surrounding rocks and dragonflies buzzed along the surface.  Newts and lizards skittered around the outside and fireflies lightened the sky like fairy lights.  To everyone who saw it, it was an ordinary pond.  It was idyllic, peaceful, and calm in the way that ponds often are.  But once all the human boys and girls were out of sight, everything changed.

Indeed, when there are no prying eyes around to see it, the pond becomes Party Pond, the wildest pond in the area.  All the local wildlife know of this pond, and they flock nightly to dance away the hours under the stars.  If you were there to see it, the party would instantly disguise itself as that peaceful pond of before, but if there was chance for you to really see it for what it was, you’d understand that the plopping and splashing of the frogs is actually their favourite dance, whilst the buzzing of the dragonflies provides the music.  And those skittering lizards and newts?  They are the drunkards that grace every party, staggering around the outskirts searching for a partner to take home for the evening or trying to score something to snort under the chirruping night sky.

Sat stoically in the middle of it all, King Toad on his perch watches the proceedings.  It’s his pond, after all, and he enjoys listening to the jazzy little numbers that the dragonflies play.  He nods his head gently to the music, his tiny little crown faltering slightly with the movement but he daren’t show his enjoyment for fear of destroying his reputation as a hard-man: a tough-toad, if you will.  Next to him, his minion Monsieur Poisson waits patiently for his next command, his tail swishing gently in the water to keep him static.  He tries in vain to look as indifferent as his boss but the delight of his watchful post and his enjoyment of the music and the dancers glimmers in his little fishy eyes.

Monsieur Poisson, like all the partying pond-life, is both fearful and in awe of King Toad for King Toad in all his grandeur, is over-bearing and mean.  He allows the pond-life to party in his pond; he offers them his home to enjoy and seemingly asks for nothing in return but Monsieur Poisson is one of the few who know the truth.  The rest of the pond-life, whilst they can’t quite work out why, are uneasy when they feel King Toad’s eyes settle on them, as though they have done something wrong and are next in line for the rumoured torture and punishment that generally involves squelching and squishing.  Or perhaps, they fear, that they have been selected for a special and dangerous task, one that they neither want to complete nor feel that they are able to complete, and that will ultimately end in that same mythical punishment.

The stories of King Toad go back centuries, for he is a very croaky old Toad indeed.  Tales are passed from generation to generation and whilst King Toad’s temper is far from unknown, each tale re-telling is embellished and flourished with wide eyes and fear.  When King Toad ribbits with frustration, the pond-life’s whispers are of screams and murder.  When King Toad stomps his little feet on his little perch, the tales add a creature under his feet and evoke images of squashed frogs and flattened fish.

King Toad knows of these tales and whilst he finds them amusing, they sadden him a little.  It’s indubitable that he likes to maintain his tough-toad image, so that those at his parties know to behave and so that his home is treated with the upmost respect.  It’s great, too, as the drunken and skittering lizards obey his orders and carry out his commands under the watchful eye of his trusty side-kick, Monsieur Poisson.   But King Toad is a good Toad at heart: kind-hearted and loving, though he rarely shows it.

This is King Toad’s secret, and Monsieur Poisson knows it.  He craves love and affection, for he’s a lonely old toad, sat on that rock in the middle of the pond.  He is all alone in the middle of the revelry.  And whilst Monsieur Poisson would never be presumptuous enough to join Toad on his perch, he maintains his place at King Toad’s side and King Toad, for his part, is grateful.

As for those who party at Party Pond, they may not understand King Toad but they offer their souls up to him without even realising it, and he drinks deeply from their well of life.  Without them, he lamented to Monsieur Poisson in a rare moment of vulnerability and weakness, he would simply die.  He would pass quickly and quietly into non-existence and the life that he has already supped on would simply melt away.  He would become Medusa’s petrified Stone Toad, with a little stone crown, sat atop his little rock, in the middle of a peaceful, ordinary, pond. 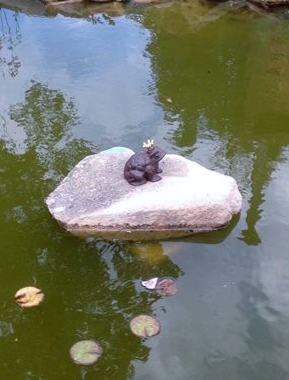